Who Wore it Best?

Gorgeous Andra Day at the Oscars in Vera Wang, and Lt. Palamas ala Apollo!

William Ware Theiss proves again that he was ahead of his time! Ah, Youth!

Star Trek’s ‘Navel Battle’ with NBC – Who Won the Battle of the Bellybutton?

UPDATE! (7-4-2021) I found another one! In The Omega Glory, the Kohm servant has a naked navel, but the moment is so quick, you may not have noticed! Sneaky!

In crazy times like these, perhaps we should contemplate our navels; or at least the ones on TOS.

As someone who loves costume design,  I’ve always been curious as to the battles that costume designers face, be it making the costumes under budget and on time, to keeping within any restrictions given by the studio or network.

When the Original Series aired from 1966-69 on NBC, the network’s Standards and Practices (S&P) team were recruited to assure that rules were being followed to avoid censorship.  For some reason, a woman’s navel was considered too sexy for family time, which is why Barbara Eden’s costume on NBC’s I Dream of Jeannie kept the waist of her harem pants high.

So how did William Ware (Bill) Theiss, master of the costume universe,  keep to this rule?  Well, he didn’t; just enough that the S&P didn’t notice!  Bill figured no one would care about navels in the future, and slipped in the scary umbilicus whenever he could.  But who won the battle of censorship?  Let’s keep score – TOS vs. S&P: (and my scoring system is total nonsense!)

Exhibit A: The Cage.  Theiss designed the iconic costumes from The Cage (1964) onward. And in The Cage, everyone knew Vina as the green Orion in a shiny reptile skin, with no navel exposure but lots of cut-outs.  HOWEVER,  there were also servers and other dancers in the background in harem-ish costumes with exposed navels:

The network had no trouble with the good Captain exposing his navel, and practically welcomed it. Probably to present Kirk as the macho alpha male.  Both sides win.  Look at that nice flat tummy. Put a pin in these pictures for now.

Although Harry Mudd’s ‘escorts’ were quite stylish, none had exposed navels (although there were hip, thigh and cleavage slashes).

The S&P need not worry at the episode’s title, as Sulu (George Takei)  was the only one who was half naked, but even his navel was covered with a high modest waistband!

Exhibit D: What Are Little Girls Made Of.

Andrea the Android (Sherry Jackson) exposed plenty with her X-shaped jumpsuit bodice, but not her navel!  Theiss gets a half point for it’s daring. 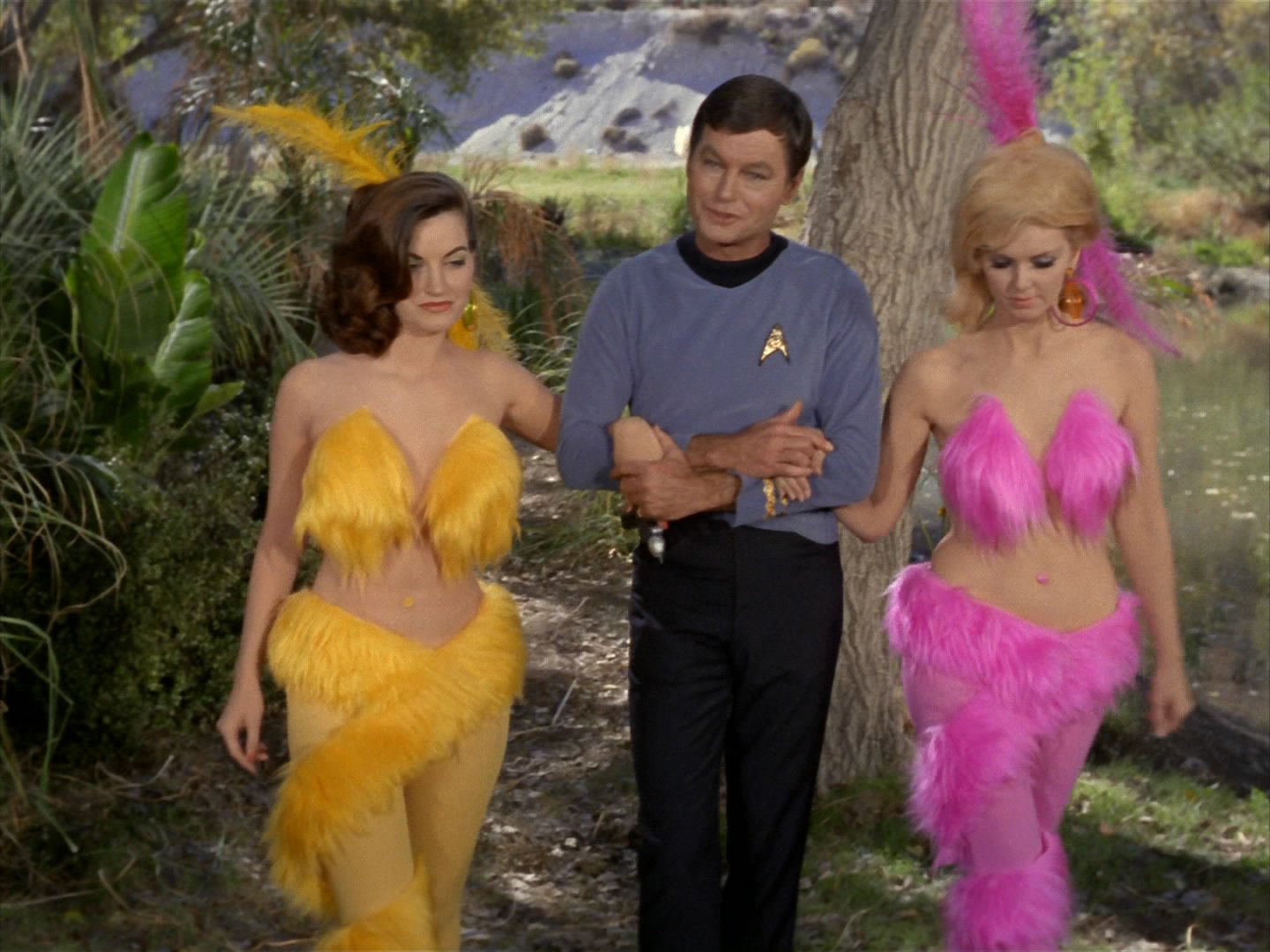 McCoy’s Showgirls may have worn fluorescent Tribbles for brassieres, but their dangerously inappropriate navels are plugged up with teeny tiny Tribbles; making them safe for democracy. Half point for cleverness.

Exhibit F: A Taste of Armageddon

Mea 3 (Barbara Babcock) and the women of Eminiar VII exposed their flanks in fancy togas,  but not their navels!

In Sylvia’s (Antoinette Bower) little fashion show for Kirk, she exposes her rib cage, but no navel! 1/2 point for daring.

Exhibit H:  Who Mourns for Adonais? 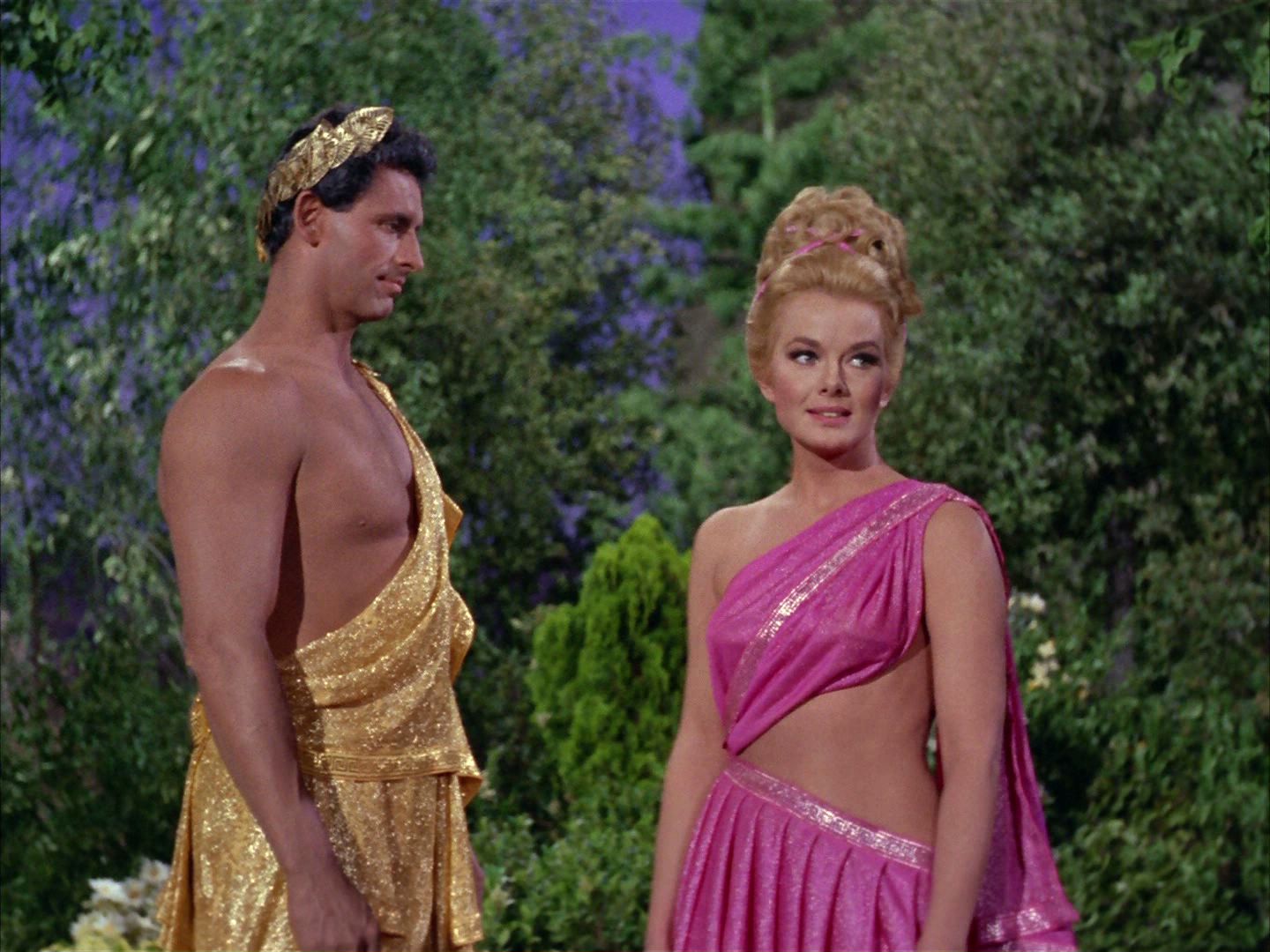 Who could forget Carolyn Palamas’ iconic candy pink toga?  It exposed Leslie Parrish’s entire back, right arm, some leg and a considerable amount of torso and hip, but no navel.  There are two conflicting stories about this stunning creation. Theiss stated in The Making of Star Trek , the costume held in place without any need for anchoring tape, while later I read that Ms. Parish did have to be taped in to avoid censorship.  I’m still giving this one a full point for just being beautifully designed and engineered! They each get a half point because I want to round up the score!

Exhibit I: Wolf in the Fold

There was a big trend in 1960s movies and TV for belly dancers and harems (maybe inspired by I Dream of Jeannie?).  Trek was no exception.  The first person we see in Wold in the Fold is Kara (Tanya Lemani) in her magnificent belly dancer garb, complete with plastic used-car-lot fringe!   Beautiful! But she dare not show her navel so a little pink flower was plunked in there! Must be a good adhesive because despite Kara’s shimmy, it never falls out!  Btw, Tanya is one of my Facebook pals, and Tanya, if you’re reading this,  ❤ Hi! ❤  Tanya is still dancing these days and she rocks! Love ya, girl!  TOS gets a half star for daring.

Well, the S&P must have had that week off, because all the natives of Gamma Trianguli VI had nekkid navels!  Three points for Bill Theiss getting away with it!  TOS inches into the lead!

Exhibit K:  Mirror, Mirror   With this blatant display of the alternate 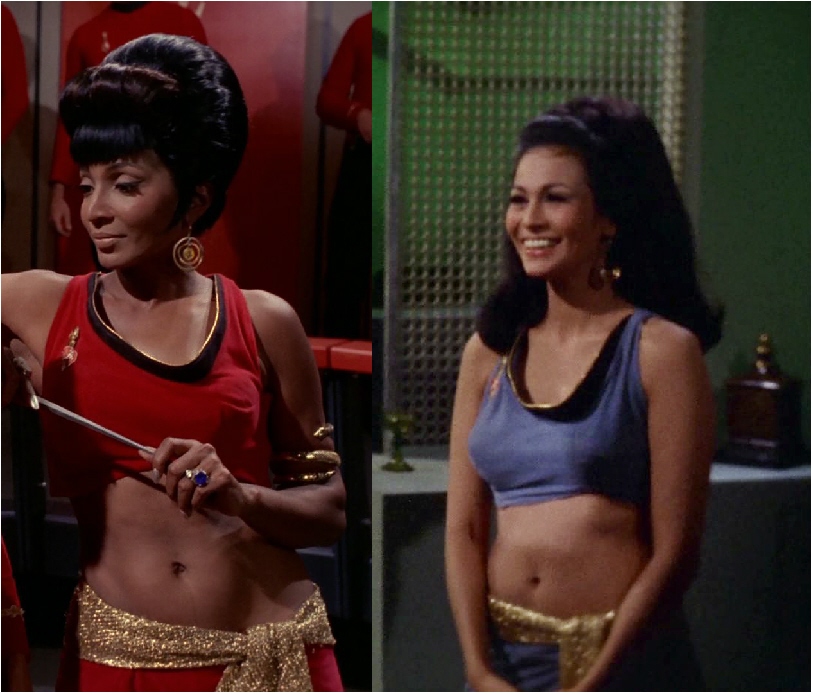 universe female uniform, it is said that the crew lured the S&P member off the set with a big lunch to film Uhura’s bridge scene! But how did he not notice Marlena? By now it was 1967, maybe the Summer of Love got the censors less uptight! (Now if only Spock was allowed to wear his tunic open!).  Two points for each actress getting away with it!

Exhibit L: I, Mudd  For heaven’s sake! Even Norman had a navel! (maybe a charger port…or three?) But the Alices and all the other female android series kept theirs hidden! 1 for S&P! 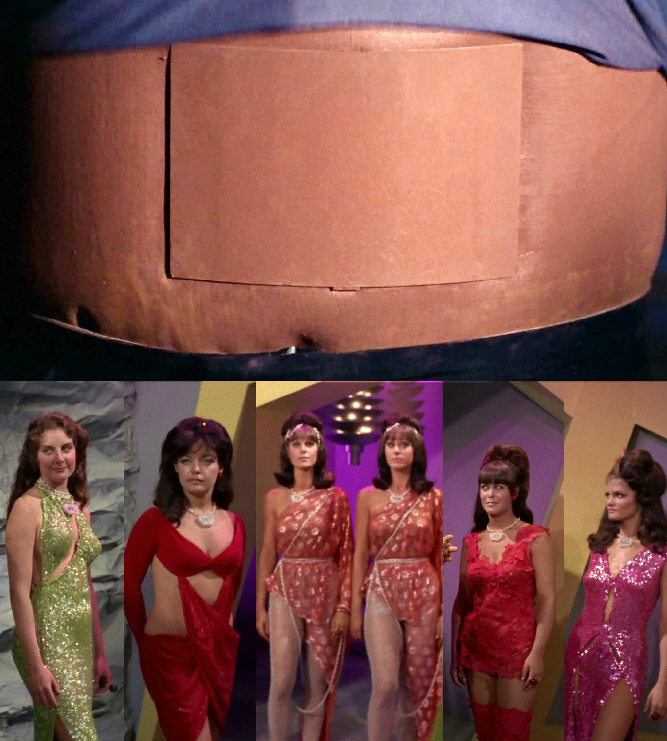 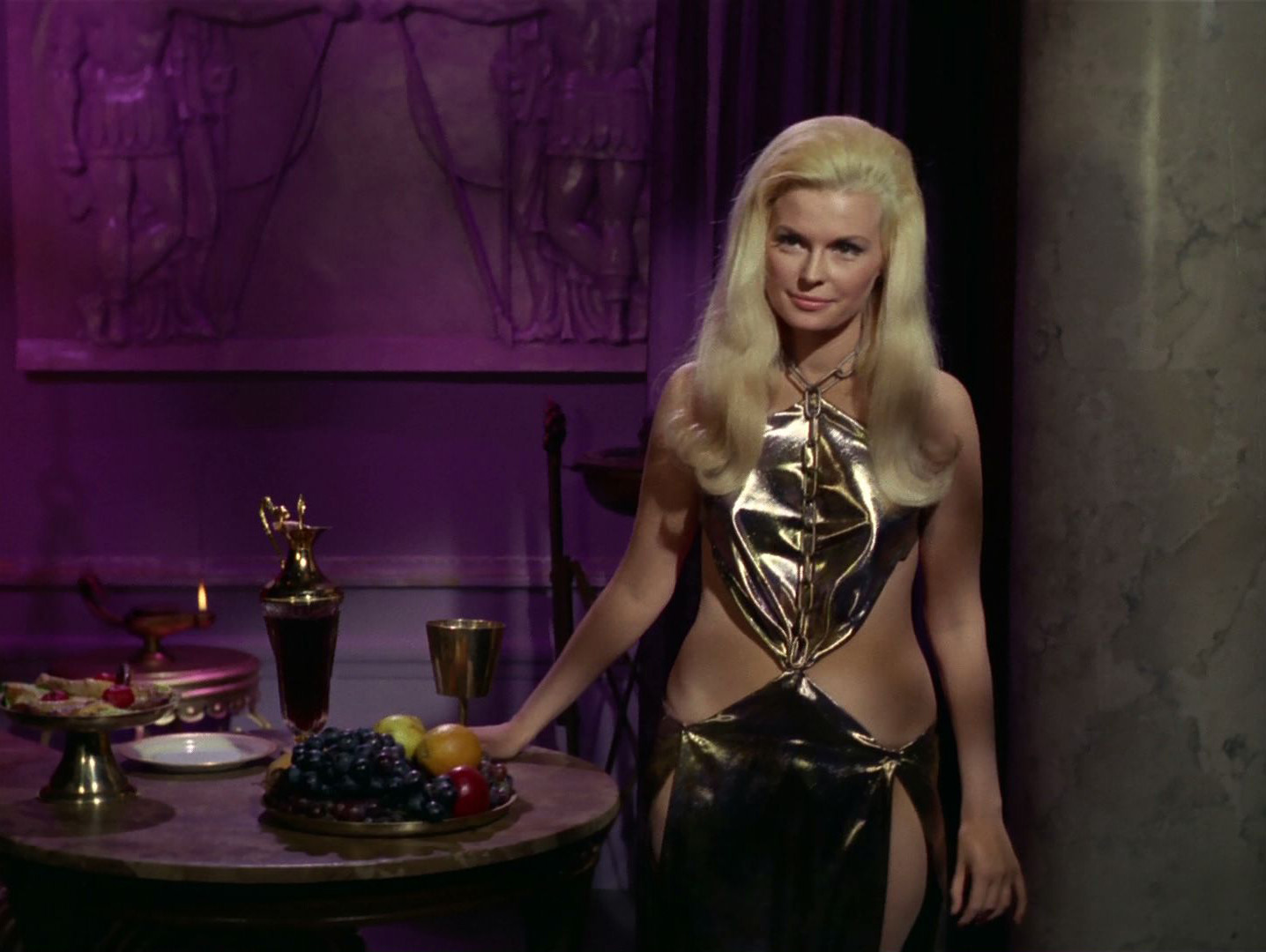 The network never seemed to complain of exposed hip bones on minor characters like Drusilla here, but no navel.  Clever (and a bit creepy) credit for use of chain as an accessory here, 1/2 point to TOS for originality, 1 Point for S&P.

Nona (Nancy Kovak) may have been a Kanutu Woman, but she was also a perfect precursor to 60’s hippie girls!    Between her low slung leather bell bottoms (with the emphasis on bell) and her macrame necklace she was ahead of the Woodstock generation by 2 years!  Of course, California is usually ahead of the curve fashion-wise from the rest of the country, so Theiss was probably surrounded by this in LA.  Even so, she’s proud of her navel and you better not cross her S&P, she’s armed!  1 point for TOS!

Exhibit N – The Gamesters of Triskellion

Everyone remembers Shahna (Angelique Pettyjohn) for her aluminum bikini, but despite it’s boldness and its possibility as a popcorn popper, it still modestly hides her navel.  And that bikini is also a marvel of engineering.  Whereas all the other drill thralls (and the Enterprise crew) wore their harnesses on the outside, Shannah’s harness is incorporated into her bikini; which means she can’t wear one without the other. Well, at least she could tuck her matching gloves into it when she wasn’t using them.  Half point to TOS for its skimpiest costume yet, but a full point to S&P. 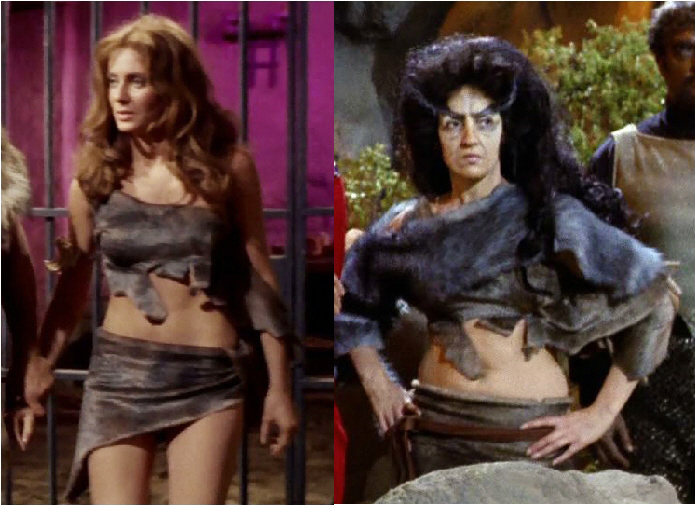 The Omega Glory and The Savage Curtain    Did you ever notice that Sirah of Omega Glory and Zora of  Savage Curtain both wore the same tattered two-piece? Zora added a fur piece, but there was no denying that Theiss had cleverly covered their navels (just barely) with a convenient flap?  Of course in battle scenes, the flap would flip up, but censors didn’t catch it! One point for TOS recycling!

Exhibit Q: Assignment: Earth   We only see her for a second, but when Isis (April Tatro) is revealed as a woman, she’s breaking the rules, as any good cat would.  1 point for TOS sneaking it in!

gorgeous costumes while on the Enterprise, all stunning and suggestive, but none with the dreaded navel. Her silver appliques here blot it out.   S&P gets 4 points for still getting their way with 4 different costumes!

Exhibit S:  That Which Survives

Losira (Lee Meriwether) might have been for Mr. D’Amato, but her pants were purely for modesty.  High-waisted with a ridiculous anti-navel flap, the S&P had won again! And we’re tied.

Exhibit T – For the World is Hollow and I Have Touched the Sky.

For the leader of a civilization, it’s a shame Natira had only one glorious gown (maybe Elaan used up all the budget!) But despite her prestigious title, she was beholden to the network S&P, with her navel wrapped up like a very fancy mummy. Still quite gorgeous.  Kudos and a point to Theiss for continuing to work with metallic fabrics (which he loathed!) and a point to S&P for winning again! Like Natira’s gown, we’re still tied up!

Exhibit U:  The Cloud Minders 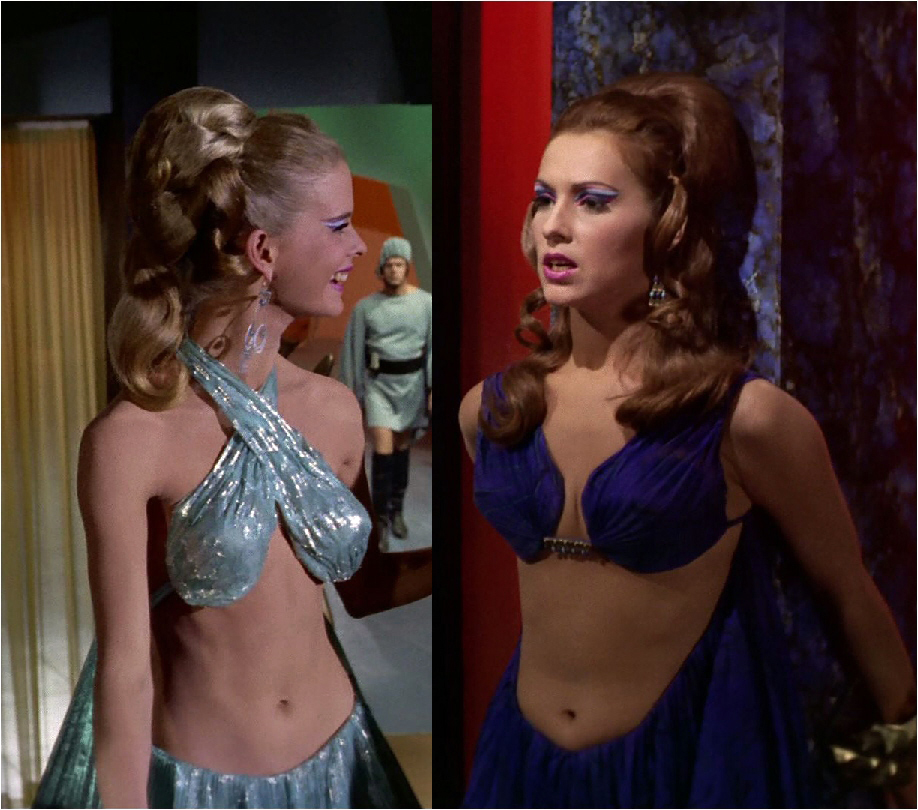 I think by this time in Season Three, Theiss was getting pretty sick of navel restrictions.  By the time they filmed The Cloud Minders, the 74th episode of the last season, I don’t think S&P were too vigilant anymore.  Hence, Theiss let ’em have it with two prominent displays here.  2 points for TOS!  Someday I want a tummy like Vanna again – (Droxine, please eat something!) ❤

Exhibit V: The Way to Eden 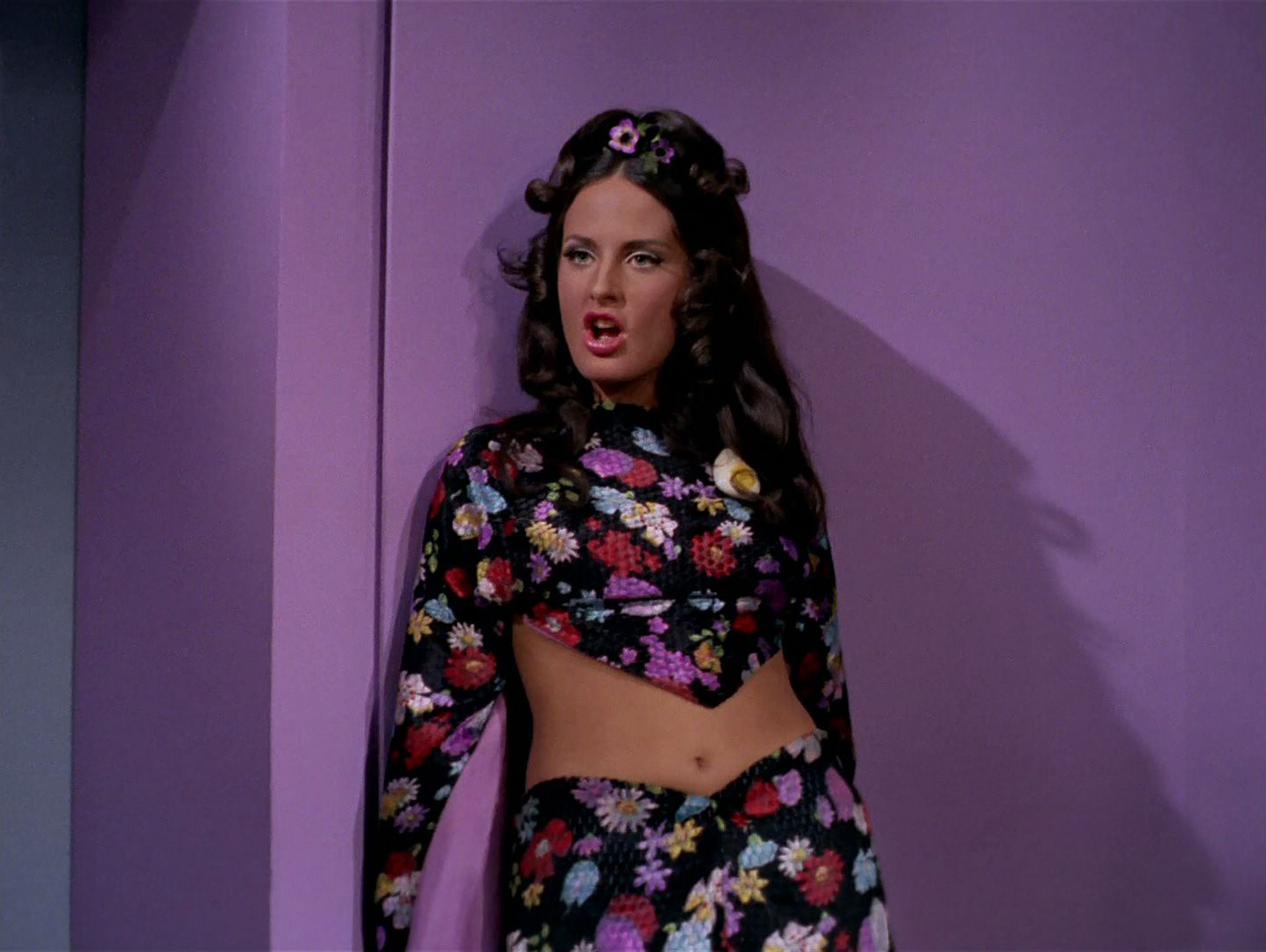 Gotta let Hippes be Hippies.  Yeah, the episode was dated, but Irina’s gown was impeccable!  With a lonely little navel in the flower patch, it’s Hippie chic! One  point for TOS.

Exhibit W: All Our Yesterdays

Zarabeth’s covering is little more than rags tied around her body, but she still keeps her navel modestly covered. Kudos for remaining remarkably clean in a damp cave!  Theiss gets a full point for leading the way in TV costume, S&P get’s a  point for still getting their way.

The Navel Battle was Won by Star Trek!

Here’s my latest Trek poster– I felt kind of sorry for Apollo in the  end.  But I’m really happy with this poster!

Posted in My Star Trek Posters