(*Gasp!*) Godzilla, Costumes, Trek and more at my day at RoberCon. (Gallery)

I had a fun time at our local “RoberCon” convention in Binghamton NY yesterday — the first sci-fi convention of its kind at the Roberson Mansion and Planetarium.   It was attended by 1000+ fans and it was especially a pleasure for me to see the universe spanning array of costumes people came in. It was like a grand ball for Geekdom, and I’m delighted  to say that I pulled off finishing my  T’Pau costume in time for the event!

The  the hardest part of  building my costume was the T’Pau’s complicated hairdo!  Seriously, it’s not a hairdo, it’s an Engineering Thesis!   The styling  took me @ 90 minutes early yesterday morning, as I assembled six different hair pieces into my own for the multi-braid effect.   Adding the ears was a little nerve-wracking too, but although it wasn’t too difficult to attach them, I felt sympathy for Mr. Nimoy and anyone who’s had to don those points. Actually, I hardly felt them at all once they were in place,and they worked quite nicely.  My favorite part of the costume was the great walking stick, which I made from an $8 wooden chair from the Salvation Army.   I reassembled the legs and a spindle from it, and spray painted it black.  The filial on top was a door pull from Home Depot, and the big ‘bead’ was a piece of florist foam, carved and painted to look ornamental.

In addition to the costume contest, there were panels discussing costume construction, and a panel that was supposed to discuss Star Trek, but it became more centered The Twilight Zone. There might have been another Trek panel, but I missed it (for the contest) There was also a guest appearance by Annie Serling (Rod’s Daughter), but I didn’t stay that long (my two teen sons were getting hungry and we had been there for nearly 4 hours).

Here’s a gallery of characters from the con.  Some of the costumes were really masterful – especially Godzilla!  Now don’t be fooled, this may look like a factory manufactured rubber suit, but it was actually was hand crafted and tooled by its wearer! I could see elements of foam rubber and styrofoam in it, and the gentleman who wore it said it took over a year to create in his garage! Wow.  Amazingly, he didn’t win 1st place that went to the two young girls who hand crafted their dazzlingly frightening costumes of Weeping Angels (including the masks) from Dr. Who.  Other winners were The Iron Patriot, (which was also amazing), Wonder Woman, and a delightfully loony Freakazoid. There were Lots of comic book, and gaming characters represented there too, as well as Steam punk creations and many Dr. Who’s (two wearing a fez).

There were many fan groups as well, with Star Wars well represented.  There was only one Star Trek group, U.S.S. Serling, whose ‘Captain’ and ‘First Officer’ I posed with (Lisa Stucky, Doc David Rasey) They liked my costume, and for me personally, it was nice to have someone there recognize my 44-year-old TV character! I admit, I got a lot of odd looks from people, with hardly anyone recognizing me as a Star Trek character.  It definitely made me feel old, as a few people thought I was from Lord of the Rings, and no one said “It’s T’Pau!” To be fair, if this was a Star Trek Convention I’d be more recognized, but despite my crafted look, I did feel a bit dated here.  At least I passed out a few trekkerscrapbook calling cards to anyone who had an inkling as to what the Original Series was! Maybe we’ll get a few more watchers here.  Glad I went.

My Weekly Spock — How’s THIS for a meeting of minds?

Mr. Nimoy posted this on his Twitter feed this past week — Wow! I think if these three men ruled the world it would be a happier place!  Could you three at least do a Shakespeare play together? 🙂 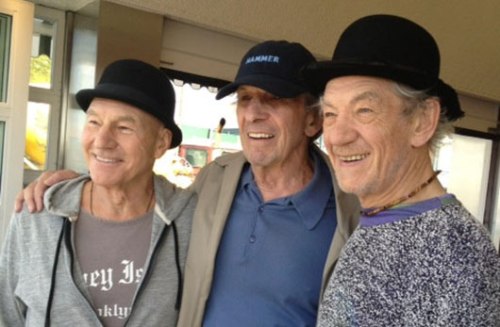 the original crew of the Enterprise by artist Gary Anderson.   Can you imagine how different the series would have been if this pilot sold? Note the original font for “STAR TREK” too!

I’m psyched up for a local Sci-Fi convention coming to town this Sunday.   It’s RoberCon, the first Sci-Fi Convention to be held at the historic Roberson Museum in Binghamton NY!

Binghamton NY was the boyhood home of writer/legend Rod Serling, (The Twilight Zone), and our pride grows deeper every year!  There’s the annual Rod Serling Film Festival, where local students write and direct their own 5 minute movies, and if you’ve ever seen The Twilight Zone, you will see occasional references to Binghamton, most notably in Walking Distance  where the main character longs for the joy of his childhood, riding the merry-go-rounds.  The guest speaker at this convention is Annie Serling, daughter of Rod, who will read from her very intimate new memoir, As I Knew Him, My Dad Rod Serling.    There will also be fan forums on Dr. Who, Star Wars, Fantasy and, of course Trek, and tutorials on costume building and gaming. There will be @ 20 vendors selling everything a geek could want, however…

My big reason for going is to be in the Costume Contest, competing as, well, lets just say, an iconic character form Star Trek!   I suspect my effort will be small potatoes compared to what I’m sure I’ll see there.  Devotees of ‘cosplay’ can be precise in every detail!   I’ll be passing out business cards for  this site too,  and I’ll post pictures and the results next week.  If any of my readers are local and want to see me make a total fool of myself, come on down!

Here’s all the info about it in this link.  Should be fun! I gotta finish my costume!

In the waning years of the weekly Variety Show format Mr. Nimoy appeared as a guest star on the short-lived Captain and Tenille Show.  For you youngsters out there, a Variety Show was a weekly entertainment broadcast which usually featured comedy skits and musical numbers.  The closest thing we have today is Saturday Night Live.  The Captain and Tenille were best known for their hit song “Love Will Keep us Together” (Never one of my favorites)  and the producers at ABC figured this was enough to qualify them for their own variety show.  The result is, well…I’d still take this any day over Miley Cyrus!  Nimoy appeared in several skits here, the best (in a very nice blue suit) as “Alistair Bannister”, the host of “Masterjoke Theater”* where he performs the running joke that every guest host would  do;  ending the skit with a pie in the face. He also does a Shatner-Style ballad/poem with the couple.   I give him credit for being able to laugh at himself, and any TV appearance he made was welcome by me! Here’s his skits:

You can buy the whole series here. (It’s episode 5)

*Masterjoke Theater was C&T’s version of the much loved Masterpiece Theater with Alistair Cooke.

Here’s the next in my movie gallery series – A Face in the Crowd (1957) starring Andy Griffith, Patricia O’Neil, and Walter Matthau.  An excellent drama, proving that reality TV and dirty politics are nothing new.   Griffith appears to be an aw-shucks corn pone, but he’s a real gritty, rotten power hungry villain! You can read my review here, and I can’t recommend it enough! 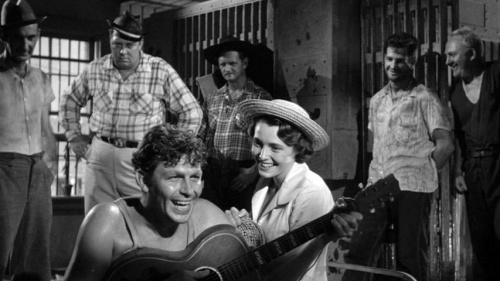 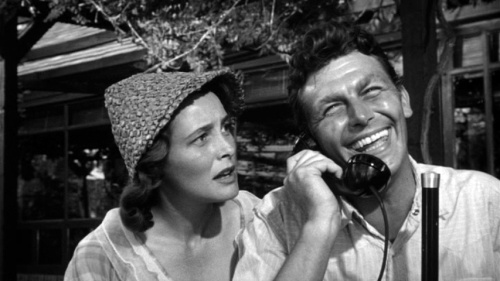 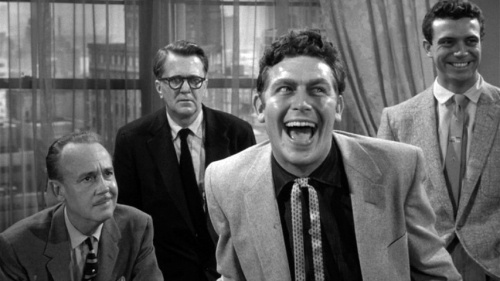 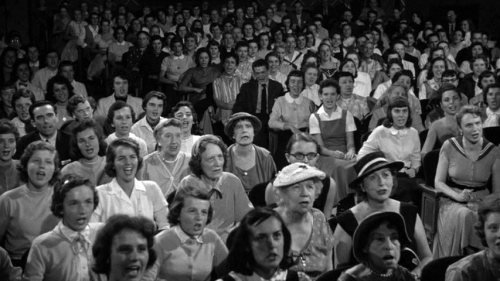 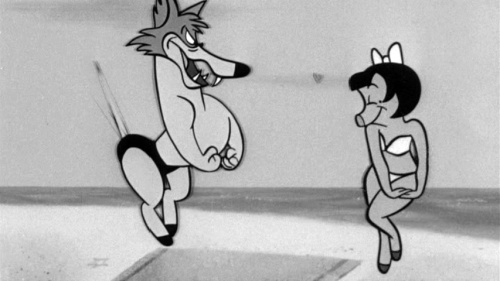 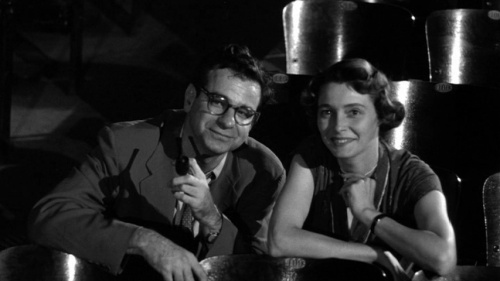 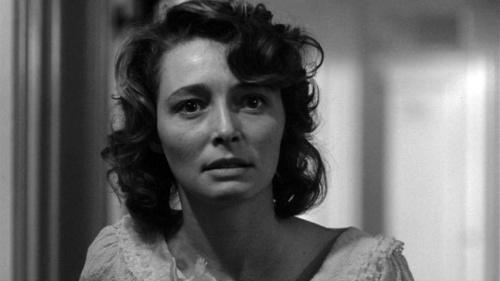 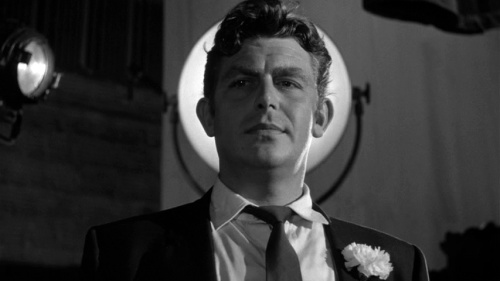 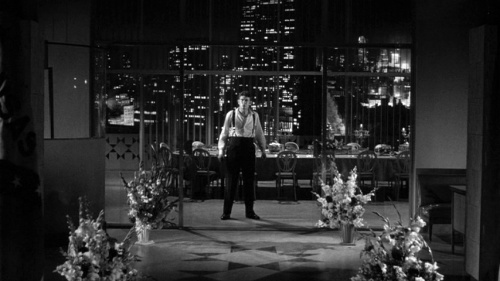 Tagged A Face in the Crowd

For this weeks Fan Art Friday, here’s  a fantastic piece by artist Rebekah (a.k.a. Toilet-Llama) on Deviant Art. This is as sharp as Spock’s ears! Marvelous.

From the EW magazine I’ve been posting, William Shatner (age 63 in 1994) gives a great interview (and even greater presence in that dashing photo!) He discusses Kirk vs. Picard, and Kirk’s uncanny success with the ladies. 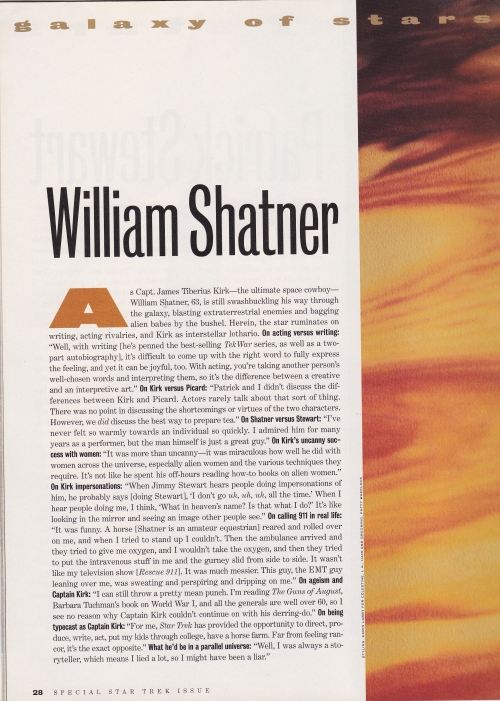 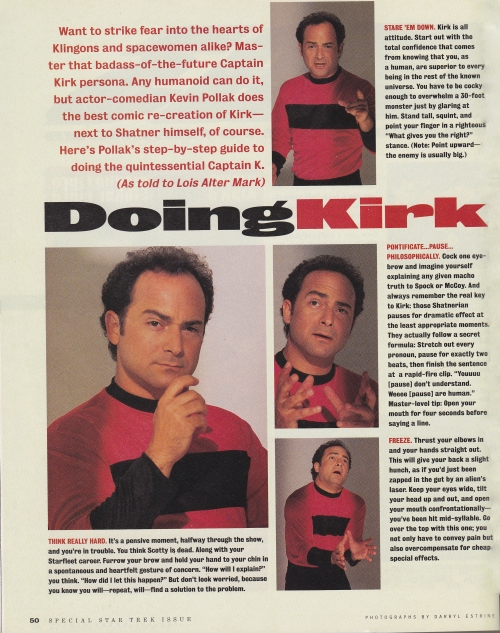