Lately I’ve been reacquainting myself with the animated Star Trek series (TAS -1973-4).  I remember being a 12-year old and excited that my favorite show was being brought back (at least in animation) and that maybe the Enterprise could finally finish its five year mission!  For the most part, it was pretty good, I only wished I had a color TV to watch it on!                                                         Anyway, recently I’ve seen a few episodes on Netflix and it really seemed all new to me again, as I hadn’t since the early 70’s.  I was taken by the lovely backgrounds and the simple, but accurate way the animation captured the faces and subtle nuances of the original actors. (Can a cartoon male be handsome? You bet!).  But something that also stood out for me was how the series often mimicked the original (TOS) in angles and style; the creators at Filmation clearly did their homework as you’ll see in these examples.   Lets’ start with some opening Enterprise shots. The makers of the series did a beautiful job recreating the ship.  There’s much more detail in the orbital images than the character scenes, but it’s lovely.  Rotoscoping anyone? 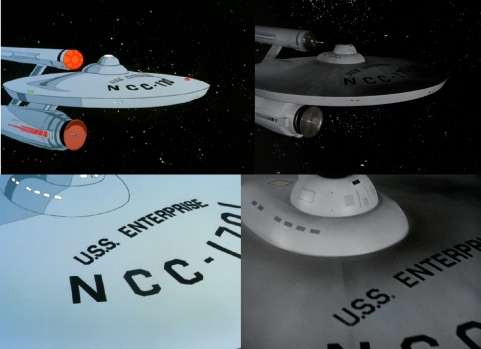 The Enterprise in its animated form: Top: Orbital views from ‘The Jihad’ and ‘Catspaw’ Center: Clever rotoscoping seen in “The Magicks fo Megus-Tu” taken from “The Cage”. Bottom: Shoulder view of the Enterprise in ‘The Terratin Incident’ and “Who Mourns for Adonais?”

But wait, there’s more.  There were several detail and character scenes that were clearly influenced by the original (if sometimes with subtlety):

Scotty in a shaft in “Once Upon a Planet” and in the Jeffries Tube in “The Naked Time”. 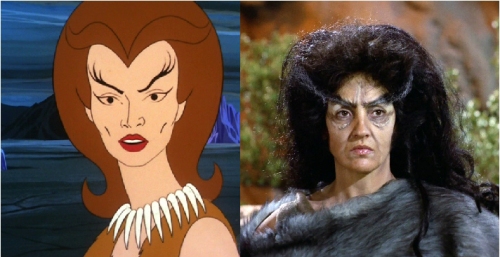 Ready for my super close-up: Magna in ‘The Time Trap’ and Sirah in “The Omega Glory”

They HAD to do this one! Kirk’s booted feet with tribbles in “More Tribbles, More Troubles”, and in “The Trouble with Tribbles”

In Once Upon a Planet, the Enterprise crew visits the amusement park planet again as they did in Shore Leave – so of course Alice and the White Rabbit are there, but then there’s a clear reference to Catspaw, when a giant cat menaces the crew from a doorway: 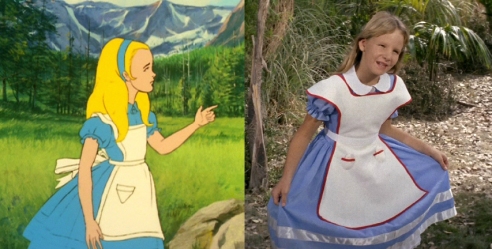 Another  revisited character was Harry Mudd – this time in Mudd’s Passion, peddling love potion to Nurse Chapel in her eternal quest for Spock’s affections.  Here, he offers her pills, just as he did to his ‘cargo’ in Mudd’s Women: 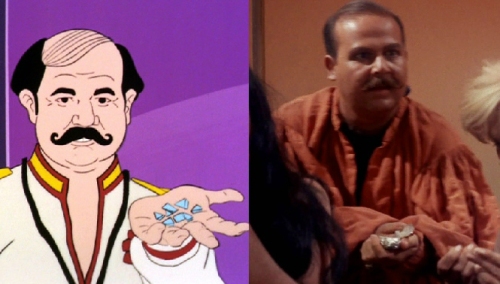 Finally, this one surprised me the most: In Albatross, Nurse Chapel checks on  sleeping patient Kol-Tai in practically the same angle she checks in on a sleeping Spock in Amok Time!

Well, this was a fun visit to the Saturday morning cartoons of my youth (modern kids don’t know what they were missing!)  If anyone here knows of any more similarities between TAS and TOS, let me know! I’ll post them!

Next Time: The Backdrops of TAS.