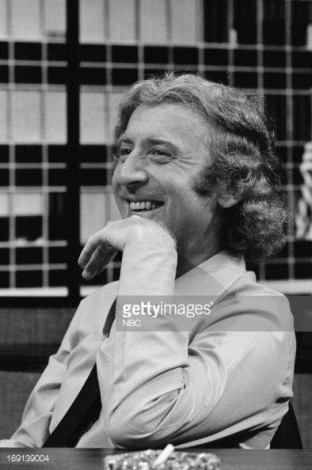 Another sad page added  to the list of farewells  to pieces of my youth that gave me joy.

I loved this guy.  The most wondrous, funny, brilliant Gene Wilder has passed away.   It was a even sadder and shocking to see that his passing was from Alzheimer’s disease.  But when I read the statement from Wilder’s nephew Jordan Walker-Pearlman  in regards to why Gene kept his diagnosis a secret, it  made perfect sense. The statement read:

“We understand for all the emotional and physical challenges this situation presented we have been among the lucky ones — this illness-pirate, unlike in so many cases, never stole his ability to recognize those that were closest to him, nor took command of his central-gentle-life affirming core personality. The decision to wait until this time to disclose his condition wasn’t vanity, but more so that the countless young children that would smile or call out to him “there’s Willy Wonka,” would not have to be then exposed to an adult referencing illness or trouble and causing delight to travel to worry, disappointment or confusion. He simply couldn’t bear the idea of one less smile in the world.”

How beautiful is that? Gene’s heart was bigger than Alzheimer’s.  It didn’t deprave him of his family recognition, and he wouldn’t let deprive his admirers of their joy.

And what joy he brought! Willy Wonka, Dr. Fredrick Fronk-en-Steen, and The Waco Kid. One moment he was a screaming neurotic, the next a gentle loving soul.  Whether he was the drunken gunslinger or a magical candy man, you believed every moment, even it his character was untrustworthy.

There’s a famous scene in Willy Wonka and the Chocolate Factory when Wonka makes his first entrance.  Gene would only do the movie if he could act this scene a certain way:  Wonka limps down to the gate with his cane, which gets stuck in the cobblestones just before the entrance.  Wonka starts to fall forward but it evolves into a perfect forward somersault, from which he springs up triumphant.   This was important for the character, for as Wilder noted “You’d never know if he’s lying or telling the truth.”

Gene understood his characters and always let their humanity shine through.  Again in Wonka, when he first has to chastise Charlie to see if Charlie will return his Everlasting Gobstopper, he is a frightening, livid firestorm. When Charlie gives back the candy, his joy cannot be contained.  Both of these traits are the real Wilder, who took his stage name from playwright Thornton Wilder (Born Jerome Silberman) but he was much more the gentle soul in real life than the volcano he’d portray.  Growing up with a mother who ailed from a heart condition, Wilder make her laugh to ease her worries.  He considered this his greatest gift, although he didn’t think of himself as funny.  “I make my wife laugh” he said,  and that was good enough.

I cannot add much to love and accolades I’ve seen everywhere, but I’m just glad we were fortunate enough to enjoy his talents in our lifetime. To paraphrase his line in Wonka:  “So shines a good Man in a weary world.”  He’ll be greatly missed and forever loved. Good Night Herr Doctor. ❤

Gene with Teri Garr and Marty Feldman in ‘Young Frankenstein’ 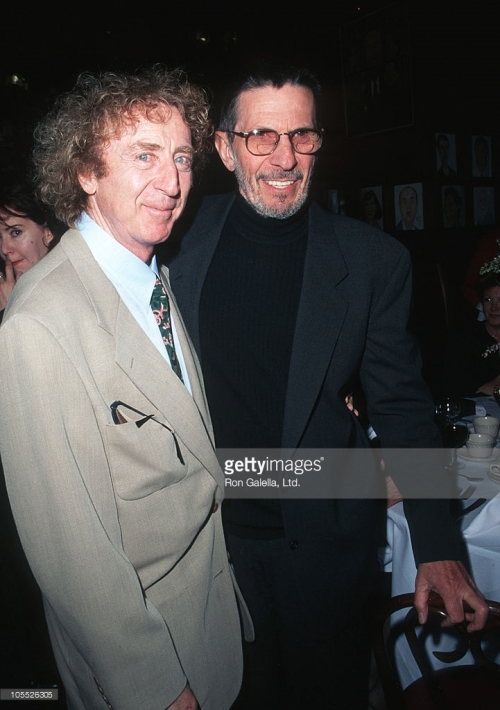 Gene with Leonard Nimoy – Nimoy directed Gene in ‘Funny About Love’. They were good friends.

Gene with beloved  wife, comedian Gilda Radner. She passed from ovarian cancer in 1989

Happiness with wife Karen Boyer in 2007 – together 25 years until the end.

With Cleavon Little in ‘Blazing Saddles’ 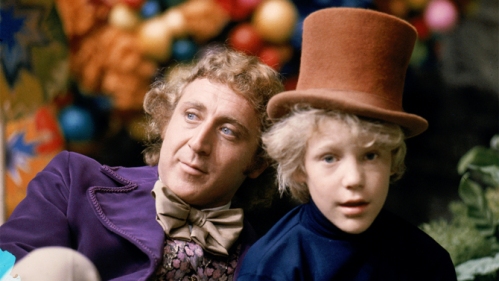 Couldn’t let the day pass without wishing one of my all time favorites a great milestone birthday!  Happy 85th to our favorite ‘Genie’.

Looking for expressive Spock faces, I got a little creative this week. 🙂 Enjoy these ‘Spock Blocks’

Tagged Amok Time, And The Children Shall Lead, Blocks, Is There In Truth No Beauty?, Miri, Mudd's Women, Patterns of Force, Shore Leave, Spock, The Apple, The Doomsday Machine, Therese Bohn

Before summer slips away, here’s some wonderful sidewalk chalk art created by artist Erik Greenawalt  “The Chalking Dad” and his daughter.  Wonderful likeness, and I even like the unfinished version with just the eyes that are so penetrating!  But like summer, these joys do not last, so maybe we should get some chalk and make our own before it’s over!  Congrats Erik!  You can see more of his wonderful work here:  https://twitter.com/TheChalkingDad 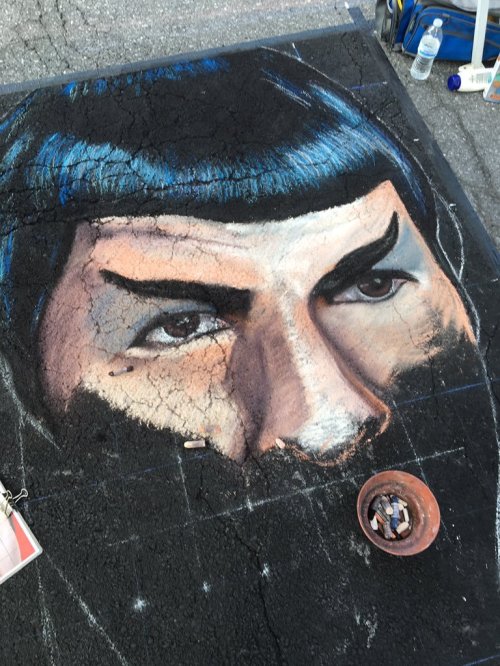 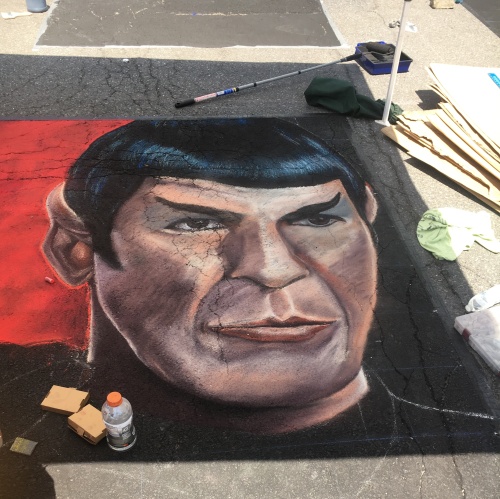 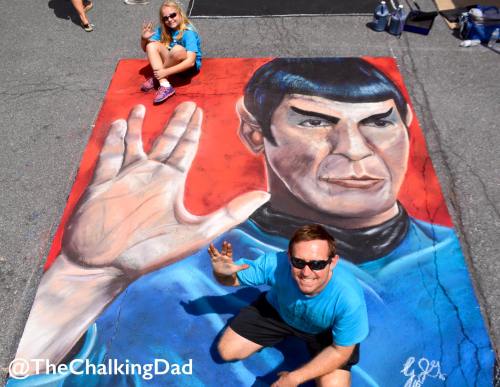 Well this must be a historic day! I just checked my statistics here and it appears that I’ve just hit 430 e-mail subscribers! I guess I have my own Enterprise crew! Ever since I started this blog 5 years ago, I hoped I would have at least as many subscribers as Enterprise crew!  Thanks to all my subscribers and there’s always room for one more on my ship!

I might have posted these before, but this is a nice, fairly clean and bright copy of the original TOS bloopers that one could only see originally at the early Trek conventions.  Enjoy!

Remember a while back when I posted those great pics of Leonard in a tennis sweater? Well, a reader kindly provided me with the full article (and pictures) that came with it!  It was from TV Star Parade from November 1968,  and it’s a great article about Leonard’s work as an acting coach!   I didn’t realize he had helped such actors as Richard Chamberlain, Michelle Lee, and Pat Boone!  Renaissance man strikes again! (Although at the time he probably needed the money) Surprisingly, there’s a reference to his future wife Susan Bay here too! The best part is that there’s still a lot of great advice here for aspiring thespians! (like me!) Acting! 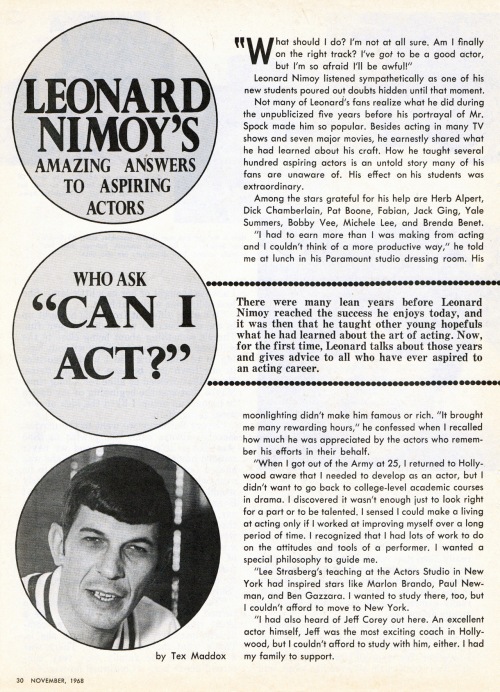 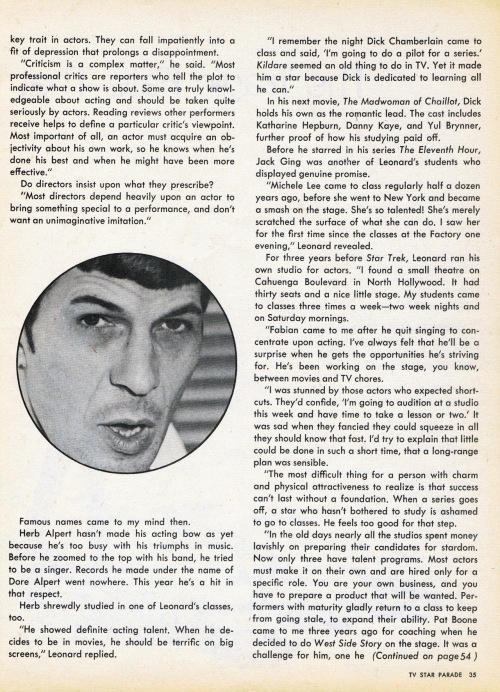 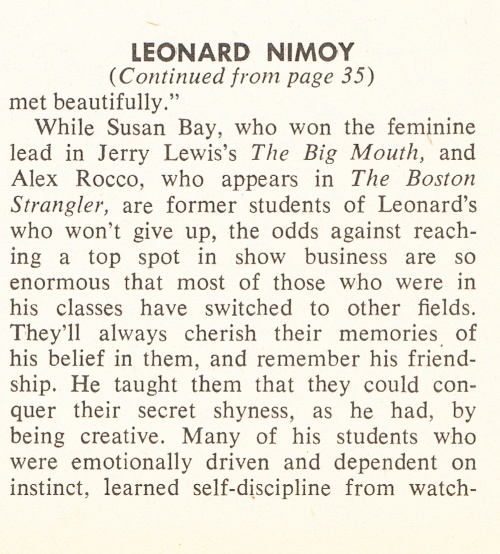 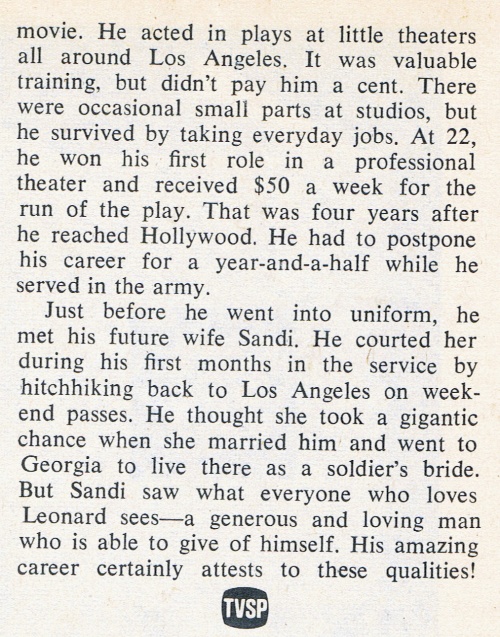 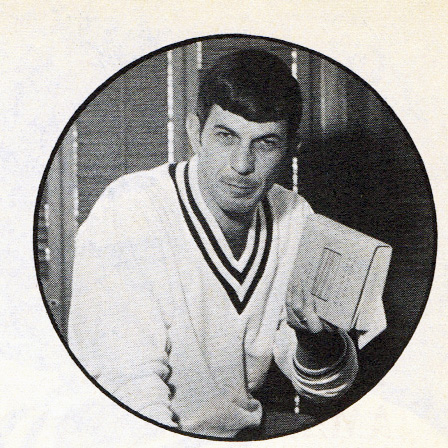 “Star Trek Beyond” My Review

Hmm…Maybe in this series of Star Trek movies, it’s the odd numbered ones that are better!

Spock, Jaylah, and McCoy face adversaries in “Star Trek Beyond”

I went to see Star Trek Beyond the other week, going in not sure what to expect, especially since the first trailer left me a little concerned.  Its impression suggested that Beyond would be nothing but action-action- action.   To my delight, this is not the case.  Instead, Beyond has a style that is way more in tune with the original series. Introspection is a key element, but the viewer isn’t beaten over the head with it.  Like the previous Into Darkness, there is reference to the original series, but unlike Darkness, it is refreshingly subtle, sometimes humorous and most importantly, respectful.  This makes Beyond far more enjoyable for old and new fans alike.  (And yes, there’s plenty of action too).

The adventure opens with Kirk attempting to give a peace-offering to a race of beings who glare down at him from a cliff.  His ambassador skills fail in way so comical,  it’s no wonder he doubts his ability as captain, (now three years into the Enterprise mission).  And Kirk isn’t alone with his doubts.  Spock’s relationship with Uhura is strained, and he’s apprehensive for his future with Starfleet, especially since receiving the sad news of Spock Prime’s death.

The Enterprise answers distress signal, but it leads to trouble and threatens whole Earth in doing so.  The crew finds themselves split apart, their beloved ship destroyed. This may sound like tried and true Trek trope, but it makes the characters boldly go where the two previous movies didn’t; forcing them into confrontations with their own mortality, and questioning their worth.

We see crew members paired off after they’re scattered on the harsh planet of Altmid, facing their fears together.  Spock and McCoy, Kirk and Chekov, Uhura and Sulu, and most notably, Scotty and Jaylah.  As they work together to find their way home, friendships become bonds and they realize that their obligations to their starship family goes well beyond duty, but to survival itself.

The cast has evolved in as any acting family would in a nearly 10-year space (!) since this reboot began. Chris Pine has grown a bit more serious and much less frat-boy into his depiction of Kirk, better fitting his character .  Zachary Quinto’s reveals subtle layers of Spock as a Vulcan still learning to hide his emotions.  His inner struggle leads to a very funny moment when he is injured, which leads Karl Urban’s delightful Bones to utter “My God, he’s delirious!” Zoe Saldana’s Uhura is kick-ass class at it’s best, and a strong role model for young women, as is Sofia Boutella, as the lone fighter, Jaylah. It’s bittersweet to see Anton Yelchin in his last outing as Chekov, he is as charming and as smart as ever, but hasn’t nearly enough time on screen as I wished he would. I give props to Simon Pegg, whose screenplay written with Doug Jung, gives Scotty a lot more adventure to bite into this time. They’ve also added subtle backstory to Sulu (John Cho) as we briefly see his husband and daughter.  The writing team has added a lot of the warmth back into the series without being smarmy.  It also deals with the the emotional tug of war that becomes an all-powerful being, as Krall (Idris Elba) has become. One suspects there more to Krall than his merciless destruction,  and eventually we discover his tragic core. It’s classic Trek storytelling, with moral consequences.  And yes, there’s a touching homage to Spock and the original crew too. ❤

My one complaint here is a cosmetic one.  Spock’s Vulcan haircut is too darn short! It needs to sprout a little more above his ears and have sharper sideburns!

Looking forward to seeing this again, and I urge all of you who have abandoned the reboot after the much shunned Darkness to come back and see how our beloved Star Trek can be true to itself again. This Star Trek has come home to its TOS roots, and I cannot think of a better way to honor the original series in its golden anniversary.

And the band got back together! As the latest Trek movie was released the other week, I thought it would be fun to look back on the first press conference for the movie that started the series way back in March of 1978.  Here’s Leonard and company looking splendid on that happy day.  He looks so genuinely thrilled at this impromptu nearly-10 year reunion! Love that velvet blazer! Bless them All!