Well, since I made Leonard Nimoy meeting his younger self, I just had to make a series!  Here’s our beloved Deforest Kelley posing with his younger, Dr. McCoy self!  Yesterday, (February 20) would have been his 99th birthday!  Loved and missed. What a wonderful actor and gentleman!

Posted in Birthdays, Meeting Yourself, My Collages

Been a while since I’ve done one of these. And Kang, you got some ‘splainin’ to do!  Enjoy! 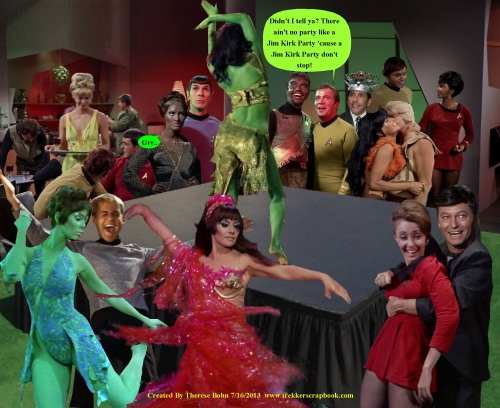 The Joy of McCoy Part 1

Back in 1976, I had the pleasure of attending the ‘Star Trek BiCentennial-10 Convention in New York City.  It was my first trip to NYC, and at the tender age of 15, it was an eye-opening, exciting time.  The Convention was considered the premiere Trek event of that time, and all of the original cast were to show up (except Nimoy and Barret, who had other commitments-dang!).  I was so excited to be going to an event where I’d find other fans like myself.

One highlight was when dear Deforest Kelley came out for an hour to talk with the fans and take questions.  “Dee entered to the thunderous applause of at least 3-400 screaming Trekkies in the auditorium of the Statler Hilton.  “Dee” was wonderful and homey, like the sweet, fun uncle you wanted to spent all day with.  As I recall, he was dressed in black flared polyester slacks and a black polyester double-knit shirt with a loud orange and white design (Oh the Seventies!).

De told several stories about acting and Trek, and when asked his favorite episodes of the series, he mentioned two or three (I honestly can’t remember which ones) but then said “And, of course, The World is Hollow and I Have Touched the Sky…(more thunderous applause) because I finally got the girl!”

But the memory I mostly take away from this was  De’s story about how he and his wife lost their pet bird out of a window in NYC once. It was a heart-warming story and I wish to heck I could remember all the details, but it boiled down to the city dwellers down below managing to eventually get the bird back to De and his wife Carolyn.  I’m trying to find a mention of it somewhere on the ‘net, but so far the only site that had it no longer exists 😦 .  If anyone finds a link to it, please let me know!

Later we went to a scheduled autograph session with De and Grace Lee Whitney.  Unfortunately, I got there too soon, and De hadn’t come in yet.  Well, Grace was sweet and I still have her wonderful autograph, but I wish the convention management let me stay to meet De too!

De’s warmth and humor are greatly missed.  A lot of people claim that De had ‘lost his movie star looks’ by the time he got into TV, but that’s just wrong.  Sure, he wasn’t’ a Bill or a Leonard in magnetism, but he had a subtle romantic air that anyone could see if they just took the time to look! ( Oh, those baby blue eyes!) And the fact that he stayed  married to his beloved Carolyn for over  40+ years is the most romantic thing of all!    De, we’ll never forget you!

Next Time: De as the iconic Dr. McCoy

Posted in Star Trek: The Original Series, The Real World

A little Trek, A little To Tell The Truth, a lot of creepy Nancy!

Posted in My Star Trek Posters