Enchantment-When Was the First Time You Saw Star Trek?

Star Trek premiered on September 8, 1966.  I’m sure there are some of you out there who were nary a twinkle in their parents (or grandparent’s) eyes at the time, yet this little show has endured for nearly 50 years, and it’s fandom still grows every day.  I’m curious to hear when many of you first saw it – what do you remember, and what got you hooked?  That’s what you call good television writing!

Budding Trekkie – Me in 1966 – Mom didn’t know it was picture day, hence the Medusa hair…

In 1966, I was 5 years old. With 7 older siblings I rarely had control over what was being watched, but I’d be off playing with my toys or coloring anyway.   I knew that everyone liked watching that odd show with the spaceship.  It wasn’t Lost in Space (although they watched that too) and my brother liked it so much he had this poster of that funny-looking man on it.  I remember passing his room and being strangely intrigued by that poster; actually a little scared since the man with the pointy ears and intense brown eyes looked so, well, sinister.  Yet he was strangely (pardon the pun) fascinating. Later in my teen years, that poster hung proudly in my room.   (That poster is still  rolled up in my basement). 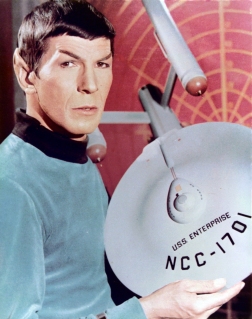 My sibs loved watching that show, yet to be honest, I don’t actually recall watching a full episode of Trek in the first two years when it aired.  The first episode I recall seeing from across the room was All Our Yesterdays, where Spock and Zarabeth are falling for each other.  (As I checked the facts it turns out that All Our Yesterdays originally aired on March 14, 1969 and repeated on August 5, 1969). This must have been the summer repeat, because my parents would have never let me stay up that late in the school year. (At this point Star Trek was aired in the ‘death slot’ of Friday nights at 10:00).

Birth of a fan girl…

As to my impressions? Well, that cave did look mighty cozy, and the lady was so pretty and the man with the funny ears kissed her, so they must live happily ever after, right?  But I was called to bed and didn’t find out.  A few years later, when we got cable just to watch Trek reruns on WPIX, I appreciated the scene much more in my budding adolescence (and growing crush on that funny looking man).  When we finally got a color TV in 1975, I was thoroughly enchanted by the brilliant color in the episodes, and just loved the heroism, drama, and just plain romance of the series.  …Yesterdays was one of my favorite episodes, and by the time I graduated in 1979, I must have watched it a couple dozen times. (No wonder I never had a date in High School!)

Anyway, That’s my Trek backstory — please share yours!  I want a lot of comments!   Thanks, Therese

This entry was posted in Uncategorized. Bookmark the permalink.

8 responses to “Enchantment-When Was the First Time You Saw Star Trek?”