Here’s today’s flashback: From November 23rd, 1979, Gene Roddenberry recalls to The New York Times the long, hard trek it took to get Star Trek to the silver screen: 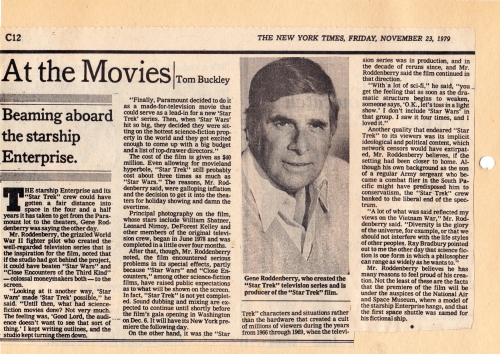 Hi Kids, here’s today’s flashback:  From 1978, a long and insightful review of Invasion of the Body Snatchers from the New York Times,  as well as my ticket stub from the local Oakdale Mall Multiplex (it had three cinemas in it, imagine that!)  I believe my ticket was (for the time) an exorbitant $1.75!  The review points out a connection between director Philip Kaufman and Star Trek — apparently he was the first one tapped to make the Trek movie back in the early ’70’s, but was switched when the budget kept getting bigger.  (A shame too, because I think the first movie would have been SO MUCH BETTER under Kaufman’s tutelage).  Kaufman puts in a good word for Nimoy here, whom he sort of used as ‘revenge’ for not being the Trek director.  Also here’s a few other little tidbits, including a listing for a repeat broadcast of ‘Baffled‘ on TV (I’m sure I watched it, still lamenting that it wasn’t made into a series)

Here’s today’s flashback (something to get you east-coasters minds briefly off of Hurricane  Sandy–Stay Safe Everyone!)

From The New York Times in 1977, here’s a nice, long interview with Nimoy in his rented Manhattan apartment, talking about Equus, Star Trek, and being prescient about what roles he will play (He knew he’ play Dysart, he knew he’d play Sherlock Holmes).   At this point, he was heavily lobbying to play the vampire Lestat in ‘Interview with the Vampire‘ that Paramout had just bought.
I don’t think he foresaw that it wouldn’t be made until 1993 and that Tom Cruise would get the part — I wonder if it  would have been better if it had been made in the late 70s or early 80’s with Nimoy in the role.  We can only imagine.