The Daily Scrapbook 10/12/12 Programs and Postcards

Here’s today’s flashback:  The 70’s were a busy time for Star Trek people, actors and producers alike.   Here’s a bunch of TV Guide listings for non-Trek projects — The Trek people kept their families fed in the drought between cancellation and the first movie.  Nimoy was the most active, in Catlow with Yul Brynner, (small but sexy role as ‘Miller’,) TV movie The Missing Are Deadly, (which I don’t remember at all) and his popularity was booming so quickly he even got his own interview special in 1976 on PBS, The Man who Played Spock with Bill Varney.  I remember Mom letting me stay up to watch this, it was on at 10, and I recall Varney at one point asking Nimoy to give him a ‘mind-meld’, and Nimoy fondly obliged.   Shatner’s movie, The Tenth Level was a fine  psychological thriller about how far one would go to inflict pain on a stranger.  Both Shatner and Nimoy would appear on Dick Clark’s “The 10,000 Pyramid” Then there were the two movies Gene Roddenberry made, the (unfortunately) failed TV Pilot, Genesis II, and its sequel Planet Earth.  Looking back on it, Genesis was the better of the two, and a great adventure story. Of course, fans were still wondering when Star Trek would be revived (see question), and finally below, my sister Kathy (I had 5) went to California in ’76 and saw the new Star Trek wax figures at the Movieland Wax Museum — see her  postcard-oh I envied her!

Back on Monday with more memories! Let me know what you think! 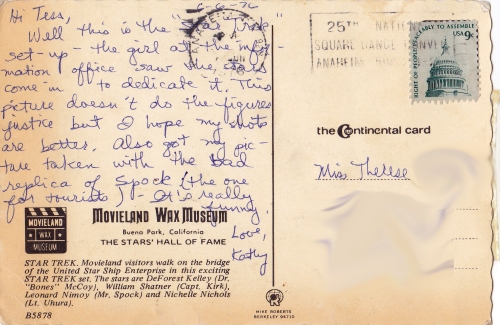