Here’s the first few articles from first Star Trek scrapbook from the 1970’s.  I had started saving articles her and there  around 1973, (see left) and within a year or two decided to paste them into scrapbooks so they wouldn’t get lost or wrecked. Of course, after 39 years, they are a tad yellowed and some are tattered, but it’s fun to look back to a time before Star Wars, when Trek was Sci-Fi king.

I started the book with this article in my local weekly Saturday TV section, another relic of the age… One reason this was tattered was because I had it taped into the lid of my 6th grade classroom desk, and one day I hid a pack of Juicy Fruit behind it and a classmate snatched it out!  Oh well.

As I re-read this article after all these years, it amazed me how cheap everything was at a Convention –an original script for $50, and original uniform for $100!!!  After reading this as a kid, it was my dream to go to a real Trek convention, and I would three years later in 1976, as I mentioned last week and will again when I get up to it.  Be sure to click on the images to enlarge so you can read them better. 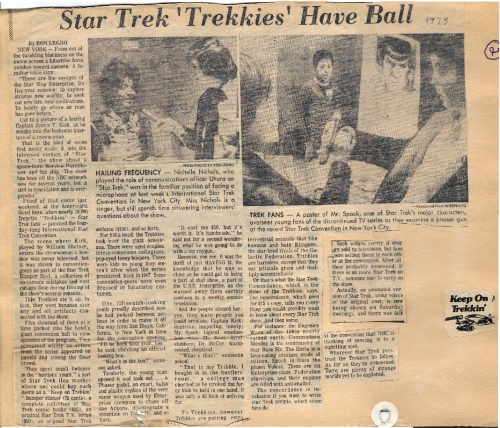 On the right side of this article you can see a little logo that reads Keep On Trekkin’ , an catchphrase coined by Trekkies and merchandisers to keep the spirit of the show alive, and to promote either a new series or a movie.  In this case, it was an ad for a T-shirt; one that I eventually bought and it’s still in my basement somewhere.  Can’t believe I was that tiny!

This entry was posted in My Star Trek Scrapbooks and tagged article, fans, Scrapbook, Star Trek. Bookmark the permalink.