For this week’s Spock, I found a classic article about Spock written by Issac Asimov for TV Guide in 1967 — Titled “Mr Spock is Dreamy”, Asimov attempts to wrap his brain around the appeal of Mr. Spock.  He concludes that it’s from the fact that Spock is smart, and that women like smart, (of course!) and regrets that he didn’t realize this in his youth.  Of course we all know Spock was dreamy because he was LEONARD NIMOY!!   Enjoy the piece, and I’m  adding a few pics of Spock looking dreamy to emphasize the point! 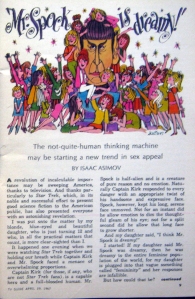 A revolution of incalculable importance may be sweeping America, thanks to television. And thanks particularly STAR TREK, which, in its noble and successful effort to present good science fiction to the American public, has also presented everyone with an astonishing revelation.

I was put onto the matter by my blonde, blue-eyed, and beautiful daughter, who is just turning twelve and who, in all the practical matters that count, is more clear-sighted than I.

It happened one evening when we were watching STAR TREK together and holding our breath while Captain Kirk and Mr. Spock faced a menace of overwhelming proportions.

Captain Kirk (for those, if any, who are not STAR TREK fans) is a capable hero and a full-blooded human. Mr. Spock is half-alien and is a creature of pure reason and no emotion. Naturally Captain Kirk responded to every danger with an appropriate twist of his handsome and expressive face. Spock, however, kept his long, serene face unmoved. Not for an instant did he allow emotion to dim the thoughtful gleam of his eye; not for a split second did he allow that long face to grow shorter.

And my daughter said, “I think Mr. Spock is dreamy!”

I started! If my daughter said Mr. Spock was dreamy, then he was dreamy to the entire feminine population of the world, for my daughter is plugged into that vague something called “femininity” and her responses are infallible.

But how could that be? Mr. Spock dreamy? He had a strong face, of course, but it was so solemn and serious, so cool; his eyebrows were drawn so outward and upward, and his large ears came to such a long, sharp upper point.

How could he compare with full-blooded Earthlings with normal ears and eyebrows, who were suave, sophisticated, and devilishly handsome to boot? Like me, for instance, just to pick an example at random.

“Why is he dreamy?” I asked my daughter.

There’s no doubt about it. I have asked other girls and they agree. Through the agency of Mr. Spock, STAR TREK has been capitalizing upon a fact not generally known among the male half of the population.

Women think being smart is sexy!

But, heaven help me, it wasn’t my fault. I was misled. When I was young I read books about children; books for which Tom Sawyer was the prototype. Anyone else old enough to remember those books?

Remember the kid hero? Wasn’t he a delightful little chap? Wasn’t he manly? He played hooky all the time and went swimming at the old swimming hole. Remember? He never knew his lessons; he swiped apples; he used bad grammar and threw rocks at cats. You remember.

And do you remember that little sneaky kid we all hated so? He was an unbearable wretch who wore clean clothes, and did his lessons, and got high marks, and spoke like a dude. All the kids hated him, and so did all the readers. Rotten little smart kid!

As I read such stories, I realized that because I had known no better I had unwittingly been committing the terrible sin of doing well at school. Oh, I did my best to change and follow the paths of rectitude and virtue, and dip girls’ pigtails in inkwells and draw nasty pictures of the teacher on my slate, and steal a pumpkin—but girls didn’t have pigtails and I didn’t have a slate and nobody I knew across the length and breadth of Brooklyn’s slums had any idea of what a pumpkin was.

And when the teacher would ask a question, I would, quite automatically and without thinking, give the right answer—and there I would be. Sunk in vice again! Talk about a monkey on your back!

There was no way out. By the time I was in high school I realized I was rotten clean through and all I could do was hope the FBI never saw my report card.

Then, somewhere late in high school, I became aware of an even more serious difficulty! I had been noticing for a while that girls didn’t look quite as awful as I had earlier thought. I was even speculating that there might be some purpose in wasting some time in speaking to one or two of them, if I could figure out how one went about it. I decided the place to learn was the movies, since these often concerned themselves with this very problem.

Remember those movie heroes? Strong, solemn, and with a vocabulary of ten easy words and fifteen grunts? And remember the key sentence in every one of those pictures?

You don’t? Well, I’ll tell you. Some girl is interested in the movie hero. She sees something in him she does not see in any other character in the film, and I was keenly intent on finding what that something might be.

To be sure, the hero was taller and stronger and handsomer and better dressed than any other male in the picture, but surely this was purely superficial. No female would be in the least attracted to such mere surface characteristics. There had to be something deep and hidden, and I recognized what this might be in that key sentence I mentioned.

The woman says to her girl friend, “I love that big lug!” Or sometimes she says to the hero himself, “I love you, you big lug!”

That was it! Hollywood was of the definite opinion that for a man to be attractive to women he had to be a big lug. I ran to Webster’s (second edition) to look up the word and found no less than eight definitions. Definition number eight was: “A heavy or clumsy lout; a blockhead.”

It was school all over again. I could manage being clumsy but I could never keep up that blockhead business long. I’d be doing fine for a while, glazing my eyes, and remembering to say “Duh” when spoken to. But, sooner or later, at some unguarded moment, I would say something rational, and bitter shame would overcome me. It was no use; I could never attain that glorious lughood that would have put me at ease with women.

I got married at last, somehow. My theory is that the young lady who married me must have seen that under my suave man-of-the-world exterior, there was a lout and a blockhead striving for expression. So she married me for inner beauty.

That was one thing all situation comedies had in common—the stupidity of the husband. The other things were the smartness of the wife and the depth of her love for her husband.

These points can’t be unconnected, can they? Anyone can see that the only deduction to draw from this is that wives, being smart, love their husbands because they are stupid.

All I can say is that for years and years I have done my best to be a stupid husband. My wife, loyal creature that she is, has assured me over and over again that I have succeeded beyond my wildest dreams and that I am the stupidest husband who ever lived. She seems so sincere when she says it, and yet I have always had to ask: Is it merely her kind heart speaking? Can she be just flattering me?

And then, then, came this blinding revelation. Here I had been watching STAR TREK since its inception because I like it, because it is well done, because it is exciting, because it says things (subtly and neatly) that are difficult to say in “straight” drama, and because science fiction, properly presented, is the type of literature most appropriate to our generation.

But it hadn’t occurred to me that Mr. Spock was sexy. I had never realized that such a thing was possible; that girls palpitate over the way one eyebrow goes up a fraction; that they squeal with passion when a little smile quirks his lip. And all because he’s smart!

But I am spreading the word now. It may be far too late for me (well, almost), but there is a new generation to consider! Men! Men everywhere! Don’t list to the lies! I have learned the secret at last. It is sexy to be smart! Do you hear me, men? Relax and be your natural selves! Stop aiming at lughood. It’s sexy to be smart!

Just one thing bothers me. Can it be Mr. Spock’s ears? Webster’s (second edition) gives that blockhead definition as its eighth. Its definition number two for the same word is “ear.” Could it be that when a girl says, “I love you, you big lug,” she means the man’s ears are as big as Mr. Spock’s? 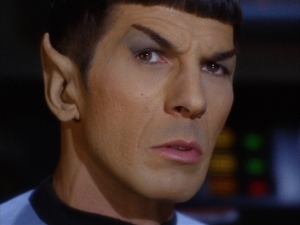 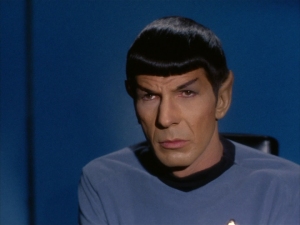 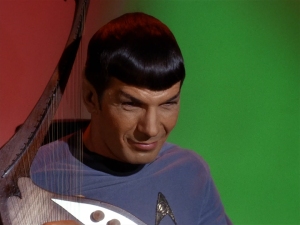 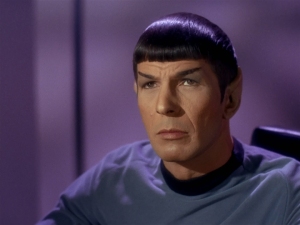