Here’s today’s Flashback:  From March 28, 1978, an article (from all things) The Star tabloid — a real full color article on the launch of the Trek movie (a feature less common then than it is now).  You can see the estimate for the movie was 15 million dollars, I believe when it was all finished it came to something like 40 million (but I’ll have to check my facts).  You’ll note that as ever the picky Trekkie, I was always on top of clerical errors in these old articles, here noting that Grace Lee Whitney was mis-identified as  Christine Chapel, even as the real Chapel, Majel Barrett is standing at left in big picture, you can see my teenage scrawl identifying her in the margin, as well as  the mis-caption of the lower right hand pic, and cross outs of other mistakes involving Waler Koenig and Grace.  And the flashback is naturally backward too! Oh these Trek amateurs!  At least Grace looks ecstatic, probably hoping that this would bring back some good work.  I always liked Grace, a crime she was screwed over in the original production because Gene wanted Kirk to have more space babes! 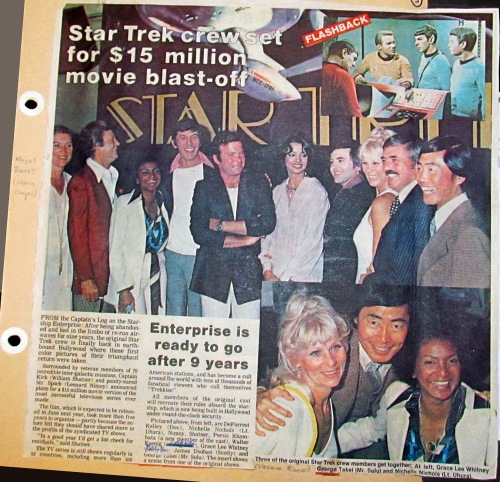 This entry was posted in My Star Trek Scrapbooks and tagged backward, cast, Star Trek: The Motion PIcture, The Star. Bookmark the permalink.