My Star Trek Scrapbooks are Here! 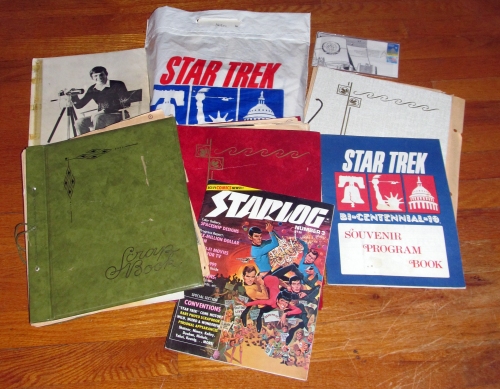 Well, I finally did it! Made good use of my scanner this summer and scanned in many pages of my old Star Trek Scrapbooks from the 1970s as well as some scans of an old cigar box I plastered with Star Trek articles and Viola!  My Trek blog will finally live up to its name!  Funny how much stuff I forgot about, I found myself giggling through so much of it!  Ah silly youth! Not only did I collect every article I could find on Trek and its stars, I also drew some silly comics,wrote fan fiction, and even a play! I was one besotted puppy.

Come with me now on a time-travel back to the pre-Star Wars 70’s, when Trek ruled the sci-fi world in syndication, becoming even more popular after it was canceled than it had even been in its initial run.  A time when Nimoy  wore super wide bell-bottoms and Shatner wore discount rugs!

I will be posting these here on the home page and they will be archived in the ‘My Star Trek Scrapbooks’  category in the  sidebar here.

Lets start with my little Trek Pandora’s box, shall we? 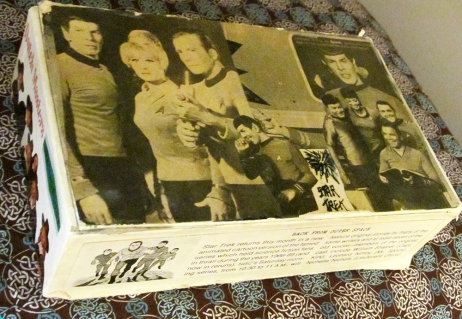 Back in 1973 or 74, my Aunt Eileen, who was always clever with recycling and such, sent up to me one of my old Uncle Eddie’s cigar boxes, decoupaged with  red,white, and blue wrapping paper emblazoned with ‘Happy Birthday!’ all over it.  It was great for little keepsakes like buttons and safety pins and pretty marbles, and this inspired my sister and I to make our own cigar box treasure chests.  My sister covered hers entirely with pictures of Elvis albums from an Columbia House flyer, while I decided to deck mine out with a few of  the latest Star Trek articles I found in  movie magazines and a TV Guide.  (Yes, at this point, 3-4 years after its cancellation, Trek was being made into new fodder for these mags, and I lapped them up with my allowance money). I didn’t think to seal my box with clear glue like my sister had, so now it’s a bit worn, yellowing, with edges curling, but you get the gist.   First, the box itself.  I can see that my propensity for collage came early. As I recall, this article came from a TV Radio magazine. 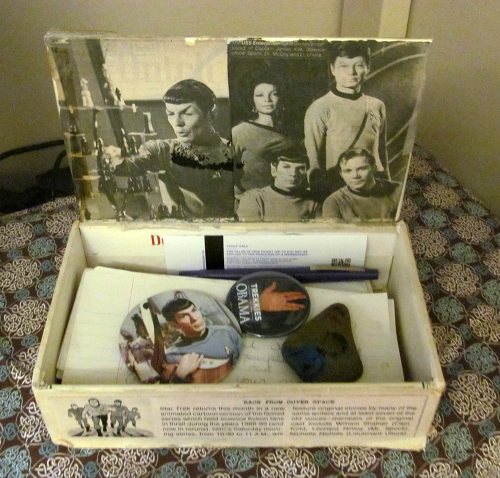 And the interior! More of the article (I can’t remember what caused that black blotch across Spock’s front) and some little treasures;  A Spock button from the 1976 NYC ‘Star Trek Bi-Centennial 10 Convention, a stone shaped like Spock’s ear that I painted his portrait on.  (and much later, a ‘Trekkies for Obama” button–this seemed like a good place to store it)  You’ll see more of what’s in the box tomorrow! 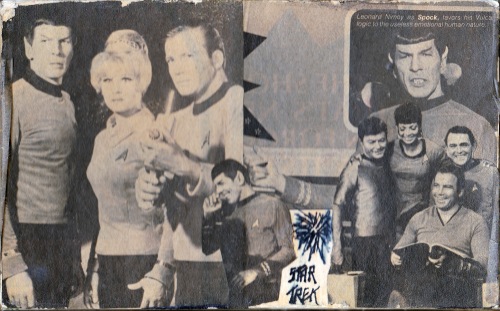 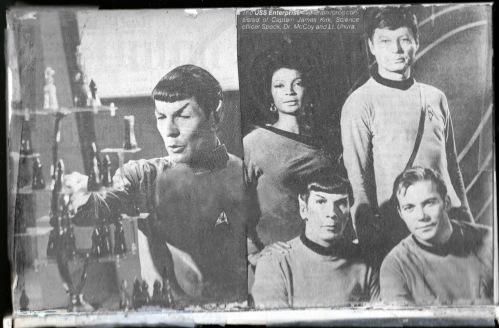 Here’s a close-up of the interior lid,with the black blotch cleaned up and brightened.

The Front Panel: An ad from the weekly PARADE magazine promoting the new Star Trek Cartoon on NBC in 1973.  My 12 year old brain couldn’t wait! 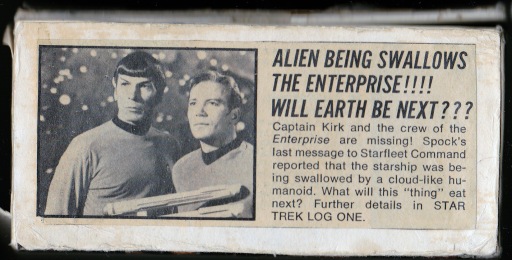 This is one side with an ad from one the those Scholastic book club flyers we used to get every month in grade school (I’m guessing this was 6th grade) The Star Trek LOG books novelized the animated series.

Well kids, that’s all for today! I think I’ve whetted you appetite for what’s coming next!  Be sure to come back every day to see what’s next in my little time machine-  Tomorrow:  What’s in the Box -Part One.

This entry was posted in My Star Trek Scrapbooks and tagged 1970s, cigar box, Scrapbook, Star Trek. Bookmark the permalink.

3 responses to “My Star Trek Scrapbooks are Here!”