I was delighted to come across these rare photos of Leonard from 1972 when he starred as Fagin in the (Milwaukee) Melody Top Theater stage production of “Oliver”.  Here he’s seen on and off stage, in rehearsal, and in some especially rare color photos, in and out of character with fellow actor Clyde Miller, who appears just a little star-struck! (Can’t blame him there!) I wish I could have seen this (or any of Nimoy’s stage works), looks like a blast. 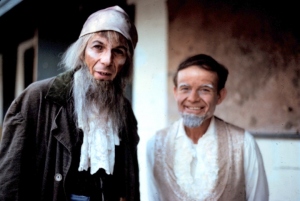