The Daily Scrapbook11/16/12 1976, a preview of Shatner’s First Biography, “Questionnaire and Interest Checklist”

At the 1976  Star Trek Bicentennial Convention, the most special guest was William Shatner (unfortunately, Leonard Nimoy could  not attend because he was performing in a play at the time)  And I’m happy to report that I was able to see The Shat at this event, he strode out in a navy blue leisure suit and charmed the life out of the whole auditorium of adoring fans!  Unfortunately, I had a really crappy pocket camera at the time and, like in most Trekkie nightmares, none of my pictures of Bill turned out! At the moment, I cannot recall much of what he said, although I remember how the everyone cheered with delight when he referred to the storied tale of how “Leonard Lost His Bicycle”  (Nimoy used to ride a bike from Trek set to Trek set to save time, and Shatner and the crew were always hiding it from him, at one point suspending just above from a catwalk, right over Nimoy’s head!)

Anyway, I don’t have Shatner pictures today, but I do  have a ‘sneak peek’ flier that was passed around at the time, previewing the new  biography of Bill that was still being written at this point.   Titled Shatner: Where No Man…  .  This was Shatner’s first foray into the printed press, and the first of his several autobiographies to plunge into the awesomeness of his  legend.  The flier promotes the hell out the book, as well as the accompanying LP  album  William Shatner LIVE, which preserved several of his college appearances.  The flier  even includes a “questionnaire and interest checklist’ just for Trek fans to aid and assist the authors of the book (Shatner, Sondra Marshak and Myrna Culbreath.  The survey really digs with questions about how Trek and especially Shatner affected pop culture and real attitudes, for example:

Do you feel that the way Shatner played Kirk, as a strong man able and willing to express profound emotions, could have had an effect on  people’s acceptance of emotional opennness, especially in men?

Wow, that’s pretty deep! But considering at the time that American culture had been through Vietnam and was evolving from an era when men were strong and silent,( like say Don Draper of Mad Men), these were pretty radical questions!   I admit, I never read  Shatner, Where No Man… but now I may check eBay for a used copy, just to see how they used this info from fans to write the book . 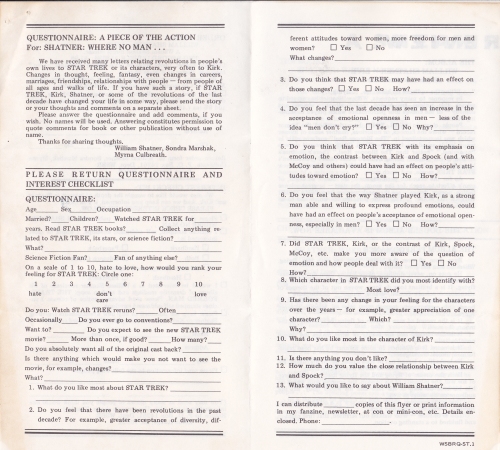 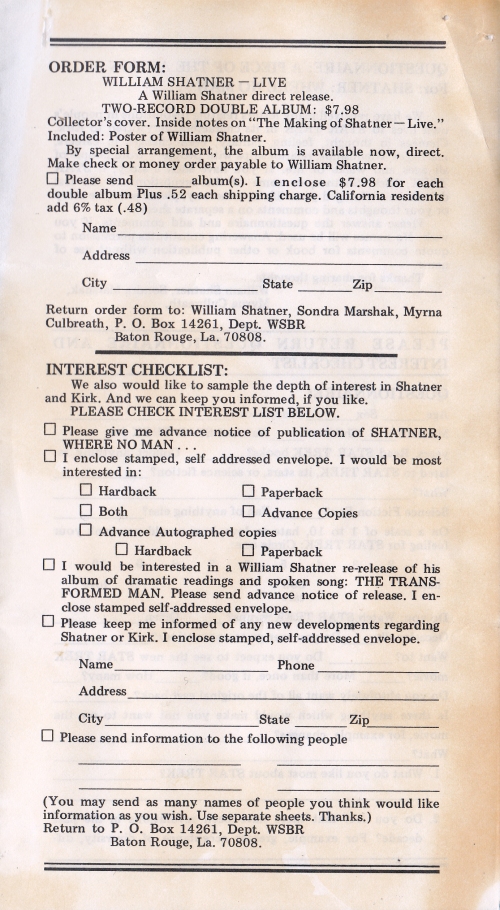 2 responses to “The Daily Scrapbook11/16/12 1976, a preview of Shatner’s First Biography, “Questionnaire and Interest Checklist””