Here’s today’s flashback, and a real taste of how Trek fandom had gone crazy!  Looks like Trekkies were supporting a good chunk of the American economy, with these two long-gone ‘enterprises’.  Imagine, two actual stores completely devoted to Trek merchandise — like a convention ‘huckster’ room every day!  Heck, if Star Wars hadn’t come along, these may still be in business!

First, the mail order service STAR TREK GALORE in Longbeach Florida, and then the famous actual storefront  FEDERATION TRADING POST in midtown Manhattan;  it must have been Trekkie paradise!  I could only imagine going there ( I had received these in the mail) and spending the day shopping for buttons, stills, and maybe a set of pointed ears.  I can see the owners gleefully rubbing their hands together as the new Trek devotees ate it all up.  And how I would have killed to see “The Only Star Trek Museum in the Galaxy!”

Anyone here ever see or hear or know more of these now defunct businesses? Would love to see any other info or pictures…  Love the artwork on these . 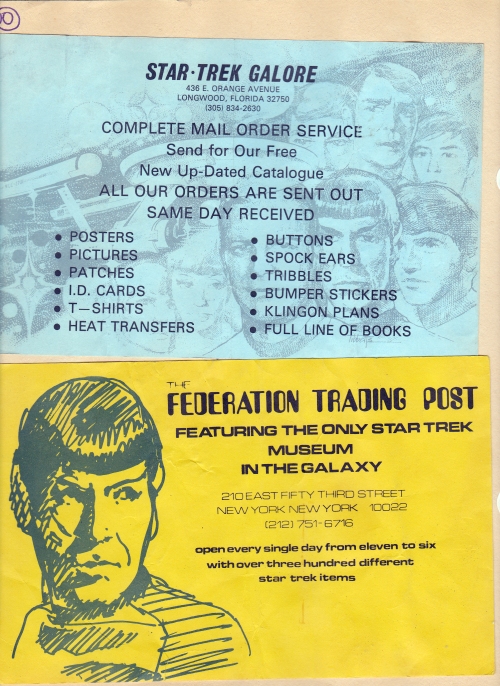